We are at the Kokskei Mountains in the Karoo, at a farm called “Welgevonden”, which has been in the Rudman family for the past 200 odd years, and during that time the farm has been overgrazed, mainly by sheep and goat farming, which is more conducive to the type of area that we are in. However, a lot of farmers have realised the damage that’s been caused and are slowly moving toward game farming, which is less environmentally damaging. However, the damage that’s been done has to be helped and repaired by man, because it will not come right on its own. Spekboom will not come back if it’s not planted by humans, so if you look behind us, the hills behind me are totally denuded of Spekboom. 250 to 300 years ago it would have been green carpets of spekboom that would have been a thick thicket, providing habitat for a variety of different animals and foods. As everybody knows, Spekboom is a wonder plant that provides a lot of nutrients for animals during drought times. It’s a plant that can survive droughts, frost and any sort of thing that nature can throw at it, however, the overgrazing by the goats and the chopping down of the spekboom for food during droughts has destroyed the spekboom thickets. So the aim of this project is to plant and replant spekboom in its thousands on all the north-facing slopes, that are in this area and this farm is going to be used as a trial run to monitor and track how it does and the rehabilitation goes. If you look behind me, these hills are all north-facing slopes, that would have all had Spekboom on them a few hundred years ago. And the aim is to replant all these areas, which is going to be a huge job creation project…. 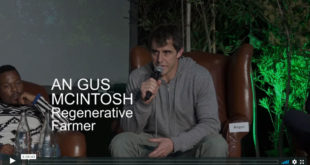