In this panel presentation, speakers present on the Effects of Climate Change on Oceans focusing in particular on Africa in the global context, in conjunction with the IPCC-AR5 Report at COP 22, Marrakech.

Mr David Osborn, Dir. IAEA Environment Laboratories – International Atomic Energy Agency, Principality of Monaco, speaks on increasing scientific cooperation on ocean acidification and other stressors in African coastal waters.
With a Marine Environment Laboratory in Monaco as well as a Terrestrial Environment Laboratory in Austria, the IAEA works at the scale of the atom, conducting science and research using nuclear techniques with very precise equipment in order to study and observe activities and occurrences within the natural system, as well as functionality of various applied isotopes, including capacity building through training of scientists from around the world – nuclear techniques play a valuable contribution to advancing the science of ocean acidification and other marine issues.
Ocean acidification research is a rapidly growing field and a relatively young discipline with a constant stream of new information and papers being introduced on OA, which resulted in the development of the OA-ICC in order to perpetuate the growth in the discipline and bring scientists together in a learning and information exchange collaboration.

Dr Libby Jewett, Dir. NOAA Ocean Acidification Program and Co-chair, Global OA Observing Network, focuses on the GOA-ON and what NOAA has been doing recently in order to develop the network in Africa. Three high-level goals have been set, i.e. Goal 1 – Gain an understanding of global OA conditions, Goal 2 – Gain an understanding of ecosystem response to OA and Goal 3 – Optimise modelling of OA and its impacts. She talks further on the acquisition and exchange of data and knowledge for modelling optimisation, etc for the OA Interactive map which provides access to metadata and visualisations through the data portal to all networked countries. As at September 2016, GOA-ON has a member network of 330 scientists from 67 countries.

Dr Vladimir Ryabinin, Oceanographer, Climatologist, Marine Engineer and Exec. Sec. – IOC of UNESCO speaks about what IOC does in Africa. He states that Africa is a priority for UNESCO as is gender balance, and with the release of the first Global Ocean Science Report (GOSR) pending release in New York in June 2017 which would be a measure of how successful we are in developing everything that includes resources for oceanographic research. Through institutions like ‘Ocean Teacher Global Academy’, he hopes and believes that a new global generation of young people would be able to apply new knowledge and methods in ocean research and science, going forward.

Dr Warren Joubert, Marine biogeochemist at the Southern Ocean Carbon and Climate Observatory, CSIR in Cape Town speaks about ocean acidification issues in South Africa’s seas and how scientists are going about solving them. An example of this is the measurement of CO2 flux observations in which SOCCO are utilising a multi-platform approach of observations, via ships, robotics and satellites. South Africa has several economically important species off the coast, i.e. west coast rock lobster, abalone, etc. and we are currently in the process of using physical experiments to determine how our organisms are physiologically adapted to low ph conditions. South Africa is currently in the process of developing an African based earth system model with a parameterised ocean component, for the region south of South Africa, that can contribute to the next round of IPCC comparison models.

Who?… What? is affecting the Future of Our Seas and Marine Ecosystems? 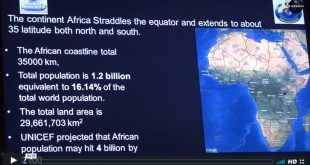