We thought our Mother Channel viewers would find this episode of the The University of Earth, a reality TV series extremely interesting. The series are intended to facilitate the re-education of the world and design new systems of agriculture, waste, water, energy, conservation, fishing, etc. in harmony with natural systems. Go to the UOE button above to access www.universityofearth.world

Nutrition – Probably one of the most important topics in the entire course!

The last two generations of people have literally destroyed the ability of the earth to provide food for the next generation. This course is about people taking responsibility and changing our future.  Nomadic societies from the past gave the land time to recover after they had farmed and hunted, by moving around. In the rush to produce more food, pesticides and fertilizers have been used with devastating results.

Judy very interestingly describes how Mesopotamia and Babylon became deserts, and how we are doing the exact same things they did, resulting in the reduction of food supply!

She continues to astound viewers with the following facts and insights:

Lyla Weston discusses how one bee with an illness caused by genetically modified produce can cause the death of an entire hive in days. Hundreds of bees with the same illness could destroy thousands of hives in a massive area. Without bees, there is a massive reduction in pollination, and without pollination from bees, food sources dwindle, once again, threatening our survival as a species.  With her passion about the impact of animal agriculture on the environment, she delivers the following shocking facts caused by beef production:

Enjoy the video for more riveting and shocking facts that we at the University of Earth are uncovering and tackling! 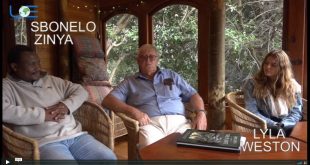