We believe that our Mother Channel viewers would be very interested in an exciting and informative new reality tv series, ‘The University of Earth’, which has the intention of facilitating the re-education of the world and design of new systems for agriculture, waste, water, energy, conservation, fishing, etc. in harmony with our natural systems.  Go to the UOE button above to access www.theuniversityofearth.world.

This series ultimately aims at bringing mankind into the understanding required to co-operate in reforming the existing systems that are undermining life on earth and so begin to engage their own intelligence on all facets of our current life reality and look towards a much improved and rewarding future.

Roger Godwin introduces the subject of Groundwater based on the book 5000 Days to Save the Planet, split into two sections, i.e. Pre Homo-sapiens: when the earth was in harmony and Post Homo-sapiens: the state of water today.

Understanding the basic principles of the water (rain) cycle on earth is important as it ties directly to our discussion on ground water, and we are addressing a broad age group of the population.

Air contains water vapour which is invisible and dependent on the heat (temperature) of the air, will contain lesser or greater quantities of vapour, e.g. the hotter the air the greater the amount of water vapour present, which as air rises through the process of convection, it will cool and the water vapour will eventually become little droplets of water (known as coalescence ~ ‘the process of coming or growing together to form one thing or system), which appear to us on earth as cloud formations in the sky.

Clouds can hold enormous amounts of water and the formation of the droplets in these clouds happens when water droplets get mixed up with dust, climbing ever higher in the sky whilst continuously bumping into each other, causing the droplets to join together with other water droplets, which continue to grow larger until they get too heavy, when this happens the heavy droplets fall from the clouds in the sky, as rain (precipitation) (Raindrops are each about 5mm across).

When rain falls, it is dispersed in various spaces, i.e. evaporation, recycled back into atmosphere, into oceans and of course on land and vegetation, which plants will absorb in different ways directing it to their roots and eventually into the ground, which is porous thereby allowing the rainwater to percolate downwards due to gravity.

Groundwater is defined as water that is found from a few millimetres under the ground to thousands of meters below ground level.  In this percolating process the water will pass through sand particles, different types of small stones and rocks, filling cavities around rocks and stones, continuing its slow journey downwards as ‘pollution-free’ water, eventually soaking into rock formations that are permeable in varying degrees, e.g. limestone (very porous) to solid granite (limited porosity), with deeper depths increasing the pressure of the water allowing for greater permeability in rocks at those depths.

The earth’s crust is likened to a huge sponge of different densities in the various layers of rock that make up the crust, which is able to hold large volumes of ‘pollution-free’ water. The downwards movement of water due to the downward trend of the strata, causes water to slowly collect in ever increasing areas, which are known today as ‘aquifers’ (term aquifer comes from two Latin words: aqua, meaning water, and ferre, which means, to bear.  One important fact about aquifers is that the water found in aquifers is really old, known as ‘fossil or paleo water’, in certain types of rock it may take a thousand years for the water to move 1 meter, but it moves! An example of this, under London it is estimated that there is an aquifer that is dated at 20,000 years old.

Aquifer water may be presumed to be ‘dead’ due to its age and being underground with little or no oxygen, however, this is not the case, as there are bacteria that live in this water, deep underground in the earth’s crust.  These water reservoirs have been sustaining and helping the water supply to the earth for years, however, at some point, the aquifer will run out, most do to the sea.  There are, however, those that will come out as surface water, and are known as ‘daylighting aquifers’, some examples here in Cape Town area are Zeekoeivlei, Rondevlei and the Cape Flats aquifers which are unfortunately polluted, so cannot be utilised during times of drought.

Lakes cannot be identified as an aquifer that has daylighted, one would have to look at the rock formations and the movement of water in the earth around the area to see whether it is the result of an aquifer.

Wetlands, an important and precious resource, are also fed by aquifers, there one would have water just below the surface with flooding occurring during certain times of the year, raising the level above surface, including a multitude of specific plants that can live in salt water conditions, assisting in the movement of water up and down the water column, as the conditions change.

Springs are determined by the pressure the water is under in a particular catchment area, e.g. if the water in a far distant hill percolates down, it creates a pressure in the valley, thereby causing a spring to pop up in the valley, almost like a ‘balance weight’ in motion, however, they cannot be relied on being seasonal, or drying up in dry seasons, etc.

In the movement of water through the earth’s crust, which is influenced by all sorts of conditions, an interesting phenomena that sometimes occurs is the occurrence of a dyke, caused by volcanic action underground, forcing a column of magma up under pressure, forcing the granite apart and cooling creating a sort of dam wall, with water moving into the area, resulting in a massive buildup of water pressure on one side and none on the other, leading to very dangerous circumstance should that dam wall crack or be drilled into.

With a simple drop of water, we can celebrate Life! 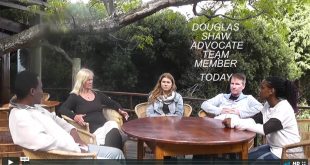