COP 21 – Discussion regarding commitments by USA and China to COP21

This video sees a panel discussion about the commitments from the USA and China to cop21 as we know they are the big two economies but also massive polluters. The American speaker reminds us that the movement in the United States Is not getting slower rather it is growing and gathering pace.

“Just as I believe the Paris agreement will ultimately prove to be a turning point for our planet, I believe that history will judge today’s efforts as pivotal,” said Obama, who was speaking in the presence of the Chinese president, Xi Jinping, and United Nations secretary general, Ban Ki-moon.

“Where there is a will and there is a vision and where countries like China and the United States are prepared to show leadership and to lead by example, it is possible for us to create a world that is more secure, more prosperous and more free than the one that was left for us,” added Obama, for whom the commitment is part of a final push to secure a green legacy for his presidency. This is a great sign for the world as the two leading economies are really showing green intent and will be leading by example for the rest of the world’s economies.

Since the time of the cop21 Donald trump has been elected president and he is a known climate change sceptic who even dismissed climate change as “a Chinese conspiracy” at one point. People are worried he may undo the positive steps that America has taken with regards to climate change. However it seems like the priorities for America and China are improving with big steps being taken to ensure renewable energy is used in the future alongside other positive green movements.

We hear from Alden Meyer who speaks on behalf of the union of concerned scientists and he says he is seeing much greater awareness of the impacts and cost of climate change. He adds that the leaders from all developing countries are calling for action and momentum is picking up. Moreover he adds there are commitments on the table from 95% of emitting countries yet the problem is he thinks they may not meet the target of remaining below 2degrees globally. The dawning of the age of renewable energy is happening and age of fossil fuels is well behind us. With renewable energy technology cost going down it makes it more accessible for all countries including developing ones to help them raiser their game.

A big challenge is to help developing countries to utilise the cost effective green technologies and bring them up to scratch with the other countries in the developed world. Greater transparency and greater ambition is the theme as we progress into the renewable future.

Will the positive movements continue as we move into the future and America gets a new president or will we move backwards? Time will tell. 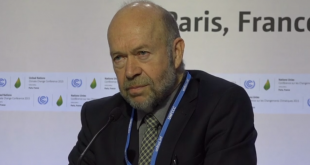