COP 21: Paris. Prof. James Hansen speaks on Atmospheric Composition targets and the Earth’s imbalance due to increased CO2 in our atmosphere and oceans, and global efforts required to stabilize the climate and restore the energy balance of the earth.

Climate (In) Justices resulting from long term and ongoing use of fossil fuels:

* Loss of ice sheets and rising sea levels causing loss of most coastal towns and cities around the world ~ A social injustice from one generation to another.

* North to South ~ most greenhouse gases added by countries in North, with biggest consequences for lower latitudes during summer months.

* Humans monopolizing the planet and threatening existing quarter to half of other species on the planet. (Estimated by IPCC)

Governmental (Dis)Honesty ~ Carbon Fees/Dividends applied on all fossil fuels, possibly the only viable international approach to a creating a solution for reducing carbon emissions significantly over time and moving to clean fuels for the future. 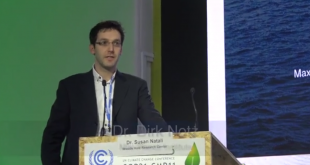